Around 3-5% of babies remain in the breech position (bottom down) when they reach 37 weeks. If your baby is breech, there is a 50% likelihood that they will rotate to a head down position by 40 weeks. As a result of a major international study called the Term Breech Trail (2000), women with breech babies at term are generally advised to have a caesarean section.

However, recent research is demonstrating that the study results do not apply to spontaneous breech births with a skilled midwife or doctor. New research has shown that breech vaginal birth is a safe option in selected cases. This shift is reflected in the NSW government's blueprint 'Maternity - towards normal birth in NSW' (NSW Health 2010). The blueprint includes objectives around increasing normal birth rates for breech babies.

What does the research say?

The Term Breech Trial (TBT) (Hannah et al., 2000) changed the way breech birth happened for women. Centres around the world compared planned vaginal birth and elective caesarean section for babies in a breech position. The study showed that there was a difference in the number of injuries breech babies experienced when born vaginally. The recommendation was that breech babies be born via caesarean section, and almost overnight women lost the option of vaginal birth. As fewer breech babies were born vaginally, so midwives and obstetricians lost the opportunity to maintain their skills in this area or the opportunity to develop new skills.

In the time since, the TBT has since been widely criticised for the way in which women were selected for the study and how their births were managed. There were also weaknesses around the skill levels of midwives and doctors involved as well as a focus upon short-term injury rather than upon the long-term impacts on babies' brains [SDGC, 2009).

Then there is the mother to consider. Caesarean section for breech birth poses additional risks to women. Verhoeven et al. (2005) examined the outcomes of 8500 elective caesareans performed in the Netherlands over four years following the TBT. This study found that while 19 perinatal deaths may have been prevented, four maternal deaths occurred that could have been avoided.

The PREMODA study (Goffinet et al., 2006) showed that careful selection for vaginal breech birth resulted in no difference in outcome for either group. A Finnish study in 2012, came to the same conclusions (0%). Another study examined the changes which occurred after the TBT, when Denmark's caesarean section rate for breech babies increased from 79% to 94%. There was no expected improvement in the rates of injury or death in babies (Hartnack et al. 2011). The re-examination of the TBT demonstrates that caesarean section is no longer the only birth option for women with breech presentation.

In their policy directive, Maternity – Towards Normal Birth in NSW, New South Wales Health aim to provide all women experiencing a vaginal breech or vaginal twin birth with one to one care from a midwife in labour by 2015 (NSW 2010).

Research indicates that manually massaging the baby into a better position is often successful for turning breech babies if after about 36 weeks of pregnancy. ECV reduces the chance that the baby will present as breech at the time of birth, and reduces the chance of caesarean birth (Hofmeyr 2012).

There is some evidence to suggest that moxibustion may be useful for turning babies from breech presentation to cephalic presentation (head first) for labour when used with either acupuncture or postural techniques of knee to chest or lifting buttocks while lying on the side. Moxibustion involves applying heat from burning moxa sticks to the side of each of the woman’s little toes and is a Traditional Chinese Medicine technique (Coyle et al.2012).

If you decide to accept a caesarean section, having an in-labour caesarean will eliminate the risk of prematurity and give the baby the benefits of the labour hormones designed to support its adaption to the world after birth.

If you decide to have a vaginal breech birth, shop around for a caregiver. You may have little time, but it may prove worth the effort to get the birth you want for your baby. 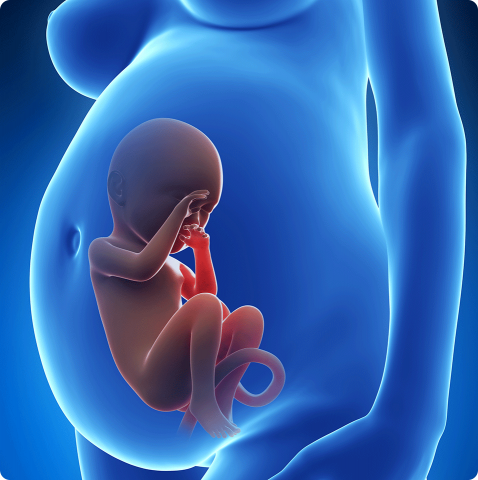 The number of breech (bottomr down) babies who will spontaneously turn head down by 40 weeks.

The number of babies who remain in a breech (bottom down) position at 40 weeks.

The increase in risk of injury or death of the baby in planned vaginal breech birth compared with caesarean section, in a Finnish cohort study of over 1,000 women (Toivonen 2012).