Every woman wants to have the best possible care during the birth of her baby. She wants to feel that her needs and the needs of her baby, are placed front and centre in all decisions. Athough this is the ideal situation, there may a tension between meeting the individual needs of women and the routines and policies of the hospital the they have chosen to look after them.

Routine interventions are generally seen as necessary in order to keep the mother and baby safe during the birth. Some interventions may have negative impacts or side effects. They might:

We might see these negative impacts as necessary trade offs if they mean that labour and birth are safer for our babies. However, there is now growing evidence that some of these routine procedures as well as potentially interfering or causing harm, do not actually benefit the woman or baby.

Which routine interventions cause harms but have no benefit to either mother or baby?

Research shows that the following forms of care or procedures increase risks and have no benefit to the mother and baby:

A Partogram is a graph of a woman's progress in labour made by the midwife by using results from Abdominal Palpation and Vaginal examinations.

Lying down during labour or birth (Lawrence et al. 2013 link).

Coach pushing for the birth when the woman does not have an epidural in place (Bloom et al. 2006 link)

Cutting an episiotomy for any reason other than the baby being distressed (Dannecker et al. 2004 link)

PPA campaigns to support maternity services to ensure that their clinical guidelines reflect the best evidence available and that midwives and doctors present this information to women so that they can make informed decisions about their care. If you would like to get involved as a maternity consumer, you will find further details here. 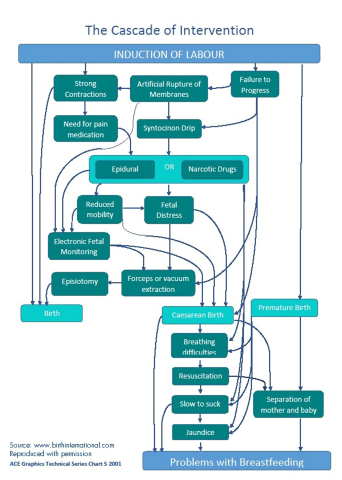 The following interventions cause harms without benefits:

It does not benefit the woman or baby to know how dilated the cervix is during labour.

It does not benefit the woman or baby of any risk status, to have external Continuous Electronic Fetal Monitoring or CTG during labour

It does not benefit the woman or the baby to routinely have the membranes artificially ruptured during labour.

It does not benefit the woman to have an episiotomy. The only benefit is to a distressed baby.