By the beginning of the second trimester of pregnancy, all the baby's organs have been laid down in their primitive form and some have begun to function, like the heart and kidneys.

From the 12th week of pregnancy the finger-like projections from the baby’s fully functioning but fairly loose placenta, move deeper into the wall of the uterus and reach the mother’s blood supply. This triggers a period of rapid growth as the baby receives significantly greater nutrition from the placenta. The baby’s placenta will now become more compact as it matures.

The placenta also allows the baby to ‘breathe’ though not through the use of its immature lungs. It provides oxygen and removes carbon dioxide.

Though it does provide some protection to the baby from harmful bacteria, viruses and most drugs can cross freely.

By the 16th week, the fine structures in the baby’s lungs have been formed, though they are a long way off from being able to breathe air, they begin to make small breathing movements as practice for the work they will do on their birthday.

The baby floats in a membrane sac full of water, called amniotic fluid. The fluid provides a warm space for the baby to grow and move and protects the baby and its placenta from jarring and injury. There is also a small amount of nutrition provided to the baby by the water.

Having been through a rapid period of growth since the beginning of the second trimester, this slows down in the 5th month of pregnancy though the baby’s organs are developing and by the end of the 25th week, most are capable of functioning.

By the 28th week mark the baby’s lungs are capable of breathing air and its nervous system has developed sufficiently to be able to control rhythmic breathing movements and body temperature. 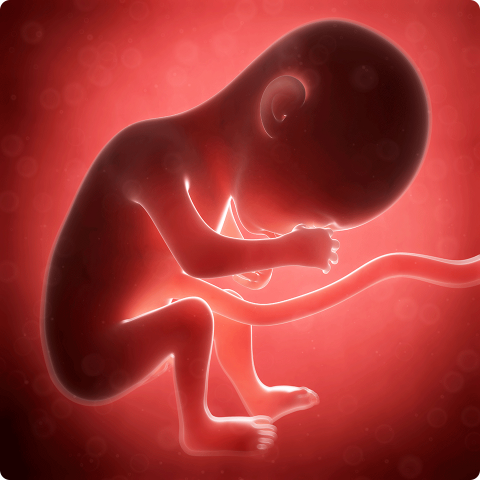