There is rapid growth, and the baby's main external features begin to take form. It is during this critical period (most of the first trimester) that the growing baby is most susceptible to damage. Alcohol quickly reaches the embryo and in the same concentration as in the mother’s blood. Nicotine and carbon monoxide (both present in cigarette smoke), caffeine most drugs and gases, virus infections such as rubella or cytomegalovirus – can all get through to the fragile baby.

In these early weeks of pregnancy the embryo is attached to a tiny yolk sac which provides nourishment. A few weeks later, the placenta will be fully formed and will take over the transfer of nutrients to the embryo.

The embryo is surrounded by fluid inside the amniotic sac. It's the outer layer of this sac that develops into the placenta. Cells from the placenta grow deep into the wall of the uterus, establishing a rich blood supply. This ensures the baby receives all the oxygen and nutrients it needs.

The fifth week of pregnancy is the time of the first missed period, when most women are only just beginning to think they may be pregnant. Yet already the baby’s nervous system is developing, and the foundations for its major organs are in place including the brain, heart and gastrointestinal tract. At this stage embryo is around 2mm long.

As the ectoderm develops, a groove forms and the layer of cells folds to form a hollow tube called the neural tube. This will become the baby's brain and spinal cord. Defects in the "tail end" of the neural tube lead to spina bifida, while defects in the "head end" lead to anencephaly (when the bones of the skull do not form properly).

At the same time, the heart is forming as a simple tube-like structure and begins to beat, pumping a trickle of newly formed blood through tiny blood vessels to bring nutrients and oxygen to the fast-growing body of cells and picking up wastes. A string of these blood vessels connects the baby and mother and will become the umbilical cord.

By the time you are six to seven weeks pregnant, there is a large bulge where the heart is and a bump at the head end of the neural tube. This bump will become the brain and head. The embryo is curved and has a tail – it looks a bit like a small tadpole.

The heart begins to beat at a regular rhythm this week and this can sometimes be seen on a vaginal ultrasound scan at this stage, pushing rudimentary blood through the main blood vessels.

The developing arms and legs become visible as small swellings (limb buds). Little dimples on the side of the head will become the ears, and there are thickenings where the eyes will be. By now the embryo is covered with a thin layer of see-through skin.

The special cells which will generate the eggs or sperm that this new person will carry are differentiated now and migrate to the newly forming reproductive organs.

By seven weeks, the embryo has grown to about 10mm long from crown to bottom. The brain is growing rapidly making the head grow faster than the rest of the body. It develops into five areas and some cranial nerves are visible.

The embryo has a large forehead, and the open eyes and ears continue to develop. The inner ear starts to develop, but the outer ear on the side of the head won't appear for a couple more weeks.

The limb buds start to form cartilage, which will develop into the bones of the legs and arms. The arm buds get longer and the ends flatten out – these will become the hands.

18 days after fertilisation your baby’s nervous system (the brain and spinal cord) starts to take shape from the continuously multiplying nerve cells. Tissues form that will develop into the vertebra that will protect the spinal cord, and as well as forming other bones.

The legs are lengthening and cartilage is forming. It is possible to distinguish foot and hand areas on the shapes which will be the baby's limbs, but the component parts of the limbs are not yet properly formed. It will take a little longer for the baby's knees, ankles, thighs, and toes develop.

The brain is continuing to form in the head end of the baby's neural tube and work is occuring on the baby's other major organs, the lungs begin to take shape.

The remains protected inside the amiotic sac and its placenta continues to develop becoming a more complex network of structures called chorionic villi, which penetrate even more deeply into the wall of the uterus. The placenta is not yet the major supplier of nutrients to the baby. This is still the role of the baby's yolk sac, but with all this growth, your baby will soon need more than the yolk sac can provide. 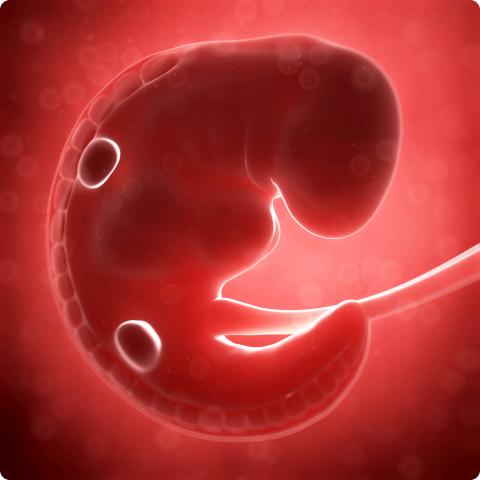