Even at this early stage, the baby has the foundation for all the organs and structures needed to become an adult. The face is slowly forming. The eyes are bigger and more obvious, there are permanently open and have some colour (pigment) in them. There is a mouth and tongue, with tiny taste buds. The baby’s hair follicles and nipples form. The hands and feet are developing – ridges identify where the fingers and toes will be, although they haven't separated out yet and the baby’s elbows are visible. The essential internal organs such as the heart, brain, lungs, kidneys and gut have now begun to form.

This is the final week of your baby’s embryonic stage. Though the baby’s body is still very primitive, it is increasingly functioning. The head makes up almost half of its body and begins to direct the first movements of its arms and legs which can be seen during an ultrasound scan. The baby’s brain begins to produce some measurable impulses. The external features of your baby’s two ears are begin to take their final shape in unison on the sides of your baby's head, and inside the head its ear canals are forming.

If you could look at your baby's face you would be able to see its eyelids are more developed and its upper lip and two tiny nostrils in the nose. The jawbones are developing, with buds for all twenty milk teeth already in the gums.

Within the baby’s gastrointestinal system, the intestines rotate. The heart is now fully-formed. It beats 180 times a minute – that's two to three times faster than your own heart.

From this week onwards, your baby is referred to as a fetus. Your baby is entering a period of rapid growth and the placenta is now developing quickly (it will be fully formed at about 12 weeks).

Your baby’s face is now well formed. The eyelids are close, and will not reopen until about the 28th week.

The ear buds look more like ears as they grow. Your baby's head makes up one-third of it's length, but the body is growing fast – it is straightening, and the limbs are long and thin with the fingers and toes starting to separate. There are fingernails.

Just 12 weeks after your last period, your baby is fully formed. All its organs, muscles, limbs and bones are in place, and the sex organs are well differentiated. The liver is now 10% of your baby’s body weight and has taken over the production red blood cells. From now on, your baby’s task is to grow and mature.

It is probably too early for you to be able to feel the baby's movements yet, but it is moving around a lot. The baby is able to bend and extend its arms and legs, it turns its head from side to side, swings the whole body to and fro and sometimes stretches from head to toe. These movements are vital for the healthy development of muscles and joints.

Your baby's skeleton is made of tissue called cartilage and, around now, this starts to develop into hard bone. 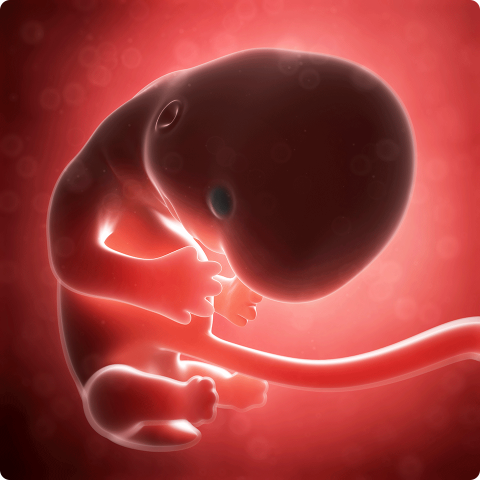