During pre-labour there may be some other signs that labour is close. A bloody 'show' often occurs during the pre-labour period. This is when the changes in the cervix result in the mucous plug coming away. Sometimes a woman's waters will break before labour begins. This might lead to a change in the pattern of tightenings and accerlate the woman towards early labour.

Pre-labour is the period before labour begins. The balance of the hormones, oestrogen and progesterone changes and the natural level of prostaglandin increases. This increases the sensitivity of the cervix to oxytocin. Oxytocin is the hormone which creates uterine contractions. These hormonal changes can create irregular uterine tightenings or contractions. The tigtenings create changes in the cervix, moving it forwards, shortening it (effacement) and softening it. Depending upon how powerful the contractions are, they may even open the cervix up a couple of centimetres.

During these final weeks of pregnancy, the baby moves lower into the pelvis, as the uterus relaxes under the influence of pregnancy hormones. This effect might give you more room to breathe and is sometimes called 'lightening'. The baby's position can affect the experience of pre-labour. The better the baby's head is applied to the cervix, the more it will stretch the cervix and stimulate the body to release oxytocin. The more oxytocin released into the blood stream, the stronger the pattern of tightenings or contractions.

Although pre-labour is not really considered to be 'real labour', you might experience mild or moderate intensity tightenings or contractions. During ‘pre-labour’, contractions can come 15 – 30 minutes apart. They might be felt as period-like cramps with or without backache. They do not get closer together and they do not get longer or stronger. Contractions will often show up during the evening when the body's background adrenaline level naturally drops. Adrenaline release interferes with oxytocin release. Your uterus will respond to whatever levels of oxytocin are circulating in your blood, by become 'irritable' with irregular pre-labour contractions. When the sun comes up in the morning, your background adrenaline level will rise again. If your oxytocin level has not risen enough to maintain a pattern of contractions, they will fade off until levels have risen further. These on and off contractions, which happen through the night and disappear during the day, can leave women feeling tired and frustrated.

Pre-labour contractions passively rotate the baby. Babies generally rotate in a clockwise direction due to the asymetrical shape of the body's internal spaces. The asymetry of the space available to the baby is created by liver. A long pre-labour, can suggest that the baby still needs to move into a better position in order to stretch the cervix evenly. Oxytocin release is stimulated by the cervix stretching. The more tucked in the baby's chin is (flexed), the better the baby's head will be applied to the cervix. A well applied head will provide a more even pressure to the cervix and a stronger stretch. When the cervix is stretched evenly the trigger for oxytocin release is greater. Rising levels of oxytocin will generate a stronger the pattern of contractions. Labour will begin to establish!

Other signs of labour approaching

Your waters may break ahead of labour. It is important to check the colour of the amniotic fluid. It is normal for the fluid to be clear or have a pink tinge. If the fluid is stained yellow, green or darker the baby has had its first bowel movement (called meconium) in the amniotic fluid. This could mean a number of things for your baby and so you might be advised to give your midwife, doctor or the hospital a call. They will probably ask to see you so that they can check the baby’s heart rate. When there is meconium in the waters it might mean that at some point the baby has been distressed. It does not necessarily mean that the baby is currently distressed. Babies who have passed their ‘due dates’ sometimes pass meconium into the water as their digestive systems get ready for the big day. Babies who are in a breech position might also pass meconium as their abdomen is squeezed by the pelvis and birth canal.

You may have a bloody, mucous ‘show’, as the mucous plug which has sealed the cervix during pregnancy comes away. The more the cervix has softened and shortened, the more blood will come away with the mucous plug.

What you could do to help yourself?

What partners can do to help 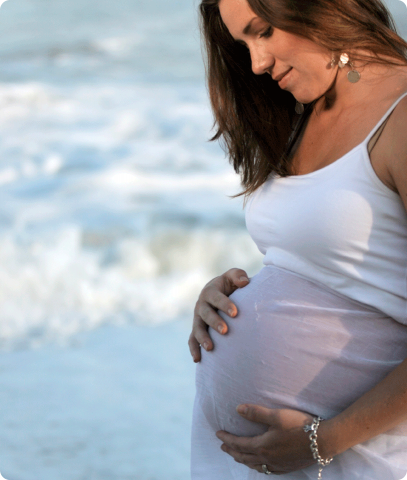 The length of pre-labour uterine contractions or tightenings

A key physical factor which determines the length of the pre-labour period.

A useful analogy for the nature of the pre-labour / early labour period. Marathons require the runner to pace themselves and conserve resources.