Ultrasound technology is offered in three different forms during pregnancy:

The routine use of ultrasound is actually a controversial issue, as its use has never been properly evaluated. This means that its use during pregnancy has never been compared with a group where ultrasound has been totally withheld.

Some screening tests are adequately discussed with parents beforehand, for example the Maternal serum screening, but others, like ultrasound are not presented in the same way, even though ultrasound can reveal even more definitive information regarding abnormalities.

For the majority of women, an ultrasound scan is a highlight of the pregnancy, during a scan they may realize for the first time that they are pregnant and it can be a time when relationships between the baby and the family can become established, though a great deal depends upon the communication skills of the operator.

There are a number of large systematic reviews (the best quality of research evidence) which have looked at the use of ultrasound during pregnancy to determine the benefit they give mothers and babies. This is what the research says:

Not useful in low-risk pregnancies

Existing evidence does not provide conclusive evidence that the use of routine fetal heart rate monitoring with Doppler ultrasound in late pregnancy, benefits either mother or baby. (Alfirevic et al. 2010 link).

Current evidence suggests that the use of fetal heart rate Doppler ultrasound monitoring in high-risk pregnancies reduced the risk of babies dying and resulted in less obstetric interventions. However, the quality of the current evidence was not of high quality, and so the results should be interpreted with some caution. (Alfirevic et al. 2013 link).

Early ultrasound improves the early detection of multiple pregnancies. The improved pregnancy dating from early ultrasound might result in fewer inductions of labour for overdue babies. However, the scientists involved in the study suggested that we should be cautious in how we interpret these results because the women who were studied had different numbers of scans at different times in their first trimester.  (Whitworth et al. 2010 link).

Not useful in late pregnancy for low-risk women

Based on existing evidence, routine late pregnancy ultrasound in low-risk pregnancies does not benefit the mother or the baby. It may be associated with a small increase in caesarean section rates. It might be valuable in the third trimester to determine the health of the placenta but the evidence for this was not strong. (Bricker et al. 2008 link) 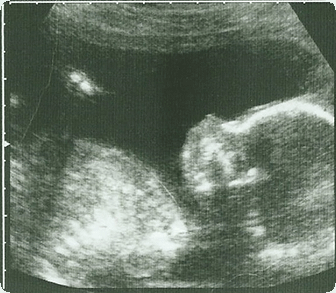 1.10.2 Ultrasound estimation of the baby's size, when the unborn baby is suspected as being large for dates, should not be undertaken in low risk pregnancies.

1.10.3 Routine doppler ultrasound should not be used in low risk pregnancies.

1.10.7 Listening to the baby's heart beat many confirm that it is alive, but it is unlikely to have any value in predicting the outcome of the pregnancy, therefore routine listening is not recommended.

1.10.9 The evidence does not support the routine use of ultrasound scanning after 24 weeks of gestation and therefore it should not be offered.